9 Outdoor Ice Skating Rinks to Visit with Kids in NYC 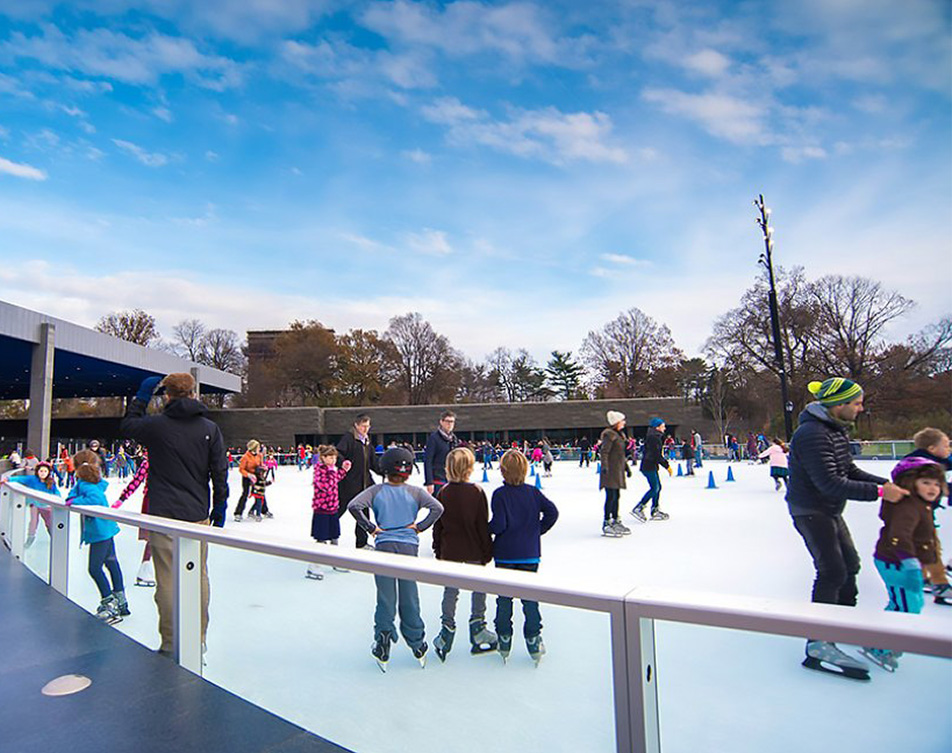 Lace up at LeFrak! The Lefrak Center at Lakeside features both a covered and an open-air ice rink. Photo courtesy of Prospect Park

Now that the beaches are closed for the season, it's time to bundle up and sharpen those ice skates. Many of New York City's outdoor rinks are open for family fall, er, winter fun.

Whether you prefer an iconic New York City destination like the ice rink at Rockefeller Center. or something off the beaten path like Lasker Rink, the city offers plenty of options for beginner and experienced skaters alike — there’s even a FREE skate spot. And if it ever gets too cold to glide outside, you can always hit one of NYC's indoor ice skating rinks.

Remember, click through to the rink's website to confirm skating times and daily availability before heading out as schedules can change throughout the season, especially during the busy NYC holiday season. Unseasonably warm October or November temperatures could delay some rinks unexpectedly.

RELATED: 50 Things to Do in Midtown for Families and Kids 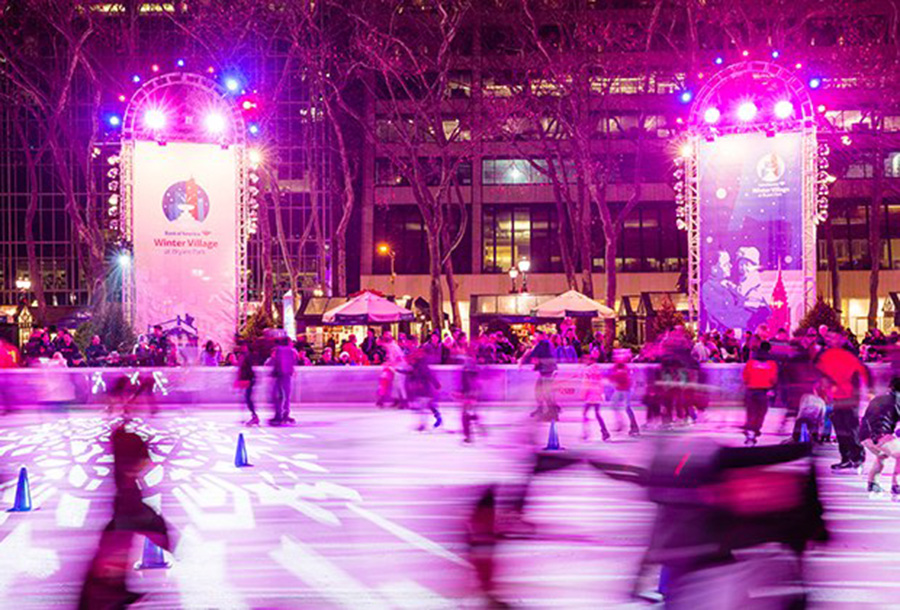 Bring your own skates and you can glide on the Bryant Park rink for free. Photo by Angelito Jusay/courtesy of Winter Village.

Bank of America Winter Village at Bryant Park – Midtown West
October 27, 2018 – March 3, 2019
FREE admission; skate rental prices and hours vary
NYC's only free-admission rink attracts massive crowds. The best time to go is early in the season, before Thanksgiving, when the weather is mild and the lines are shorter. Don’t even try to go during holiday break. Later in the season, stick to weekdays before 5pm and early weekend mornings if you can. If you want to avoid the lines, spring for the Express Skate package, which includes entry and skate rental. Afterward, grab a hot chocolate at the Snackbar in the Skating Pavilion, then hit the always-popular holiday shops. Bring your own blades and locks for a truly free skate session.

Lasker Rink – Harlem
October 27, 2018 – March 2019
This gem of a rink is easy to get to, inexpensive, and not as crowded as most of the others. You'll find plenty of school groups on weekdays, and locals in the evenings and on weekends. Hockey, skating lessons, and parties are all available. Afterward, stick around and explore this lovely part of northern Central Park, including the East 110th Street Playground. Note: It's cash only.

LeFrak Center at Lakeside – Prospect Park, Brooklyn
October 28, 2018 – April 8, 2019
Built on the old Wollman Rink site, this Prospect Park complex features 32,000 square feet of skating surface on two rinks: one open-air, the other covered. Skating lessons for beginners and experienced skaters, hockey leagues for kids and adults, and birthday party packages are offered. The Bluestone Cafe on site offers sandwiches, salads, and snacks as well as coffee and hot chocolate. In summer, the ice rinks transform into a roller rink and water play area. Read our full review of Lakeside. 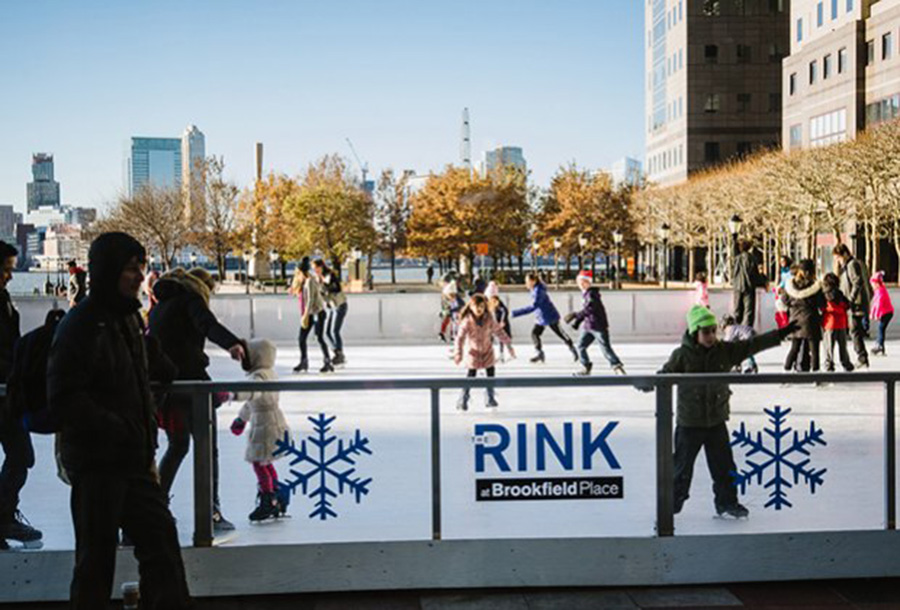 The rink at Brookfield Place is popular among neighborhood kids who fill the ice after school.

The Rink at Brookfield Place – Battery Park City
Opens November 2018
Enjoy stunning views of New York Harbor and the Statue of Liberty while skating around this rink, which returns for its fifth season. The ice is cleaned at the end of every 90-minute session, so don't dawdle getting out there. Visitors are admitted on a first come, first served basis. At 7,350 square feet, it beats the Rock Center rink for space and can accommodate 250 skaters at a time. Prices, however, are steeper than at some other rinks. Parent-and-child skate lessons and hockey classes are offered. Afterward, you'll find plenty more to do in the family-friendly Battery Park City neighborhood. Adjacent Brookfield Place has bathrooms, hot cocoa, and snacks, as well as plenty of rotating art exhibits, and winter fun (plus Santa!) come the holidays.

Riverbank State Park – Harlem
November 2, 2018 – March 17, 2019
Riverbank State Park is a hidden gem in New York City. It's rarely crowded and one of the least expensive rinks for public skating. Riverbank also offers an inexpensive hockey program and skating lessons, and season passes also are available. After you skate, check out the park's other attractions , including an a class="pg-link1" href="https://mommypoppins.com/newyorkcitykids/6-family-friendly-indoor-pools-for-swimming-this-winter-in-new-york-city"> indoor swimming pool, sports fields, and amazing views. There's a snack bar adjacent to the rink, as well as the restaurant Sofrito NYnear the entrance of the park. 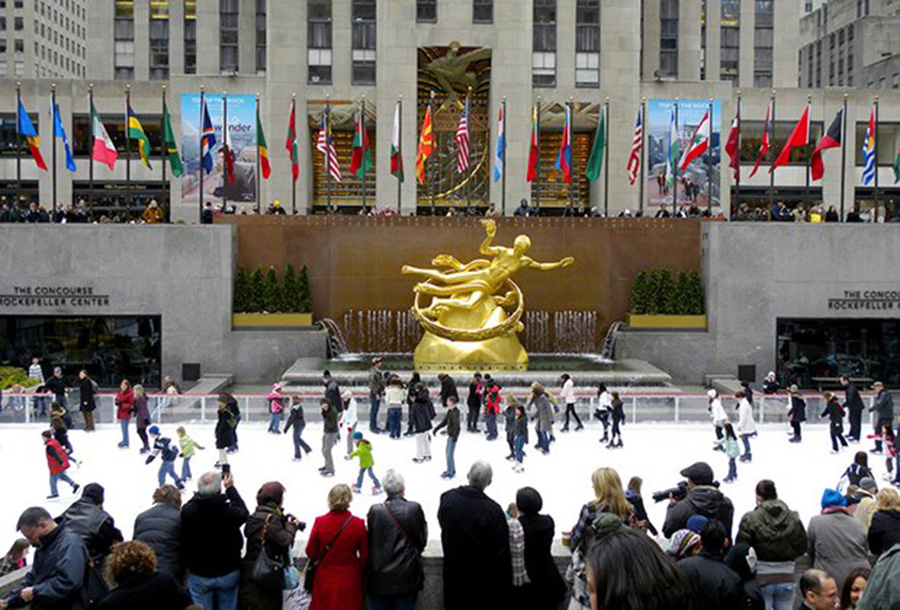 Ice Rink at Rockefeller Center – Midtown East
October 8, 2018 – April 2019
This popular tourist destination opened for the season October 8. Despite its popularity, three-hour waits aren't always the norm—just when the Christmas tree is lit. Skating early or late in the season is fun and easy—if expensive. (Even during off-season, it's by far the priciest rink in the city.) It accommodates just 150 skaters, hence the wait, but some believe it offers one of the most charming, intimate skating sessions, smack in the middle of NYC. Sign up for one of the special packages such as breakfast with Santa for an extra-special holiday treat. There are plenty of family-friendly sights in the area, too. 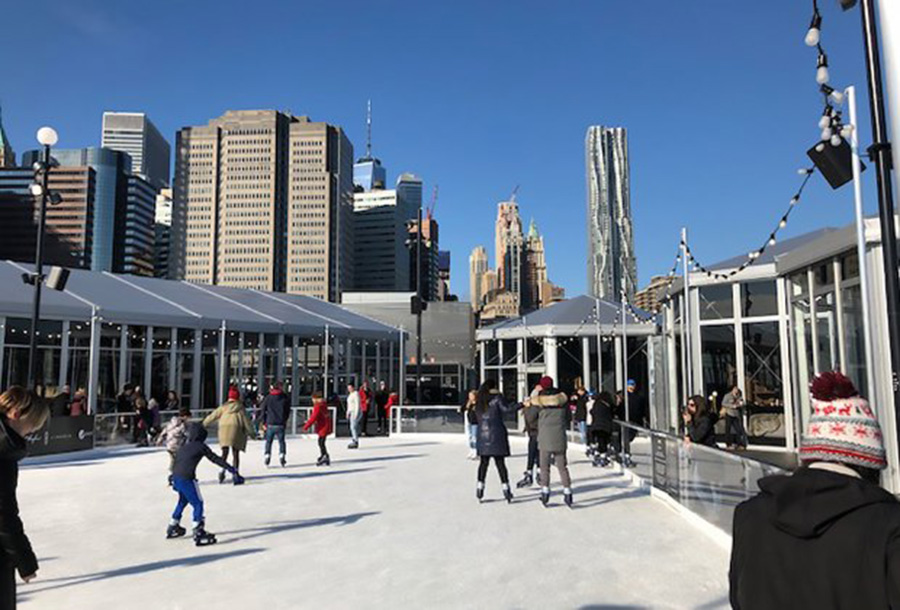 The views from the Winterland Rink at Pier 17 are impressive! Photo by Andy Fenwick

Pier 17 Winterland Ice Rink – Seaport
October 8, 2018 – April 2019
This winter at the South Street Seaport, the Winterland Rink adds to the list of seasonal outdoor ice skating options in the the city. Situated on the roof of Pier 17, just a short walk away from the Seaport Museum, the Winterland Rink bills itself as the only rooftop rink in the city. The views of the Brooklyn Bridge and the harbor are pretty great, and the rooftop space is bathed in sunlight and sheltered from the wind. The rink is sized like other temporary rinks, but takes the irregular shape of a pond: two connected, asymmetrical ovals.

Wollman Rink – Central Park
October 20, 2018 – April 2019
We couldn't do this roundup without mentioning this iconic NYC skate spot in Central Park. Though it is perpetually crowded, every family should skate here at least once. Try to arrive at the start of the first session or right after school to get a few spins in before the hordes arrive. A moonlit, post-dinner skate is always fun, too. You'll be rewarded with one of the most famous views of Midtown, not to mention a perimeter of pretty, possibly snow-dusted trees—as well as tired kids, ready for bed. Lockers are available for a fee. Note: It's cash only.

WWII Veterans War Memorial Ice Skating Rink – Staten Island
Opening dates not yet available
Located in the gorgeous Clove Lakes Park, this is the only outdoor skating rink on Staten Island and is very popular with borough families. If you're interested in skating lessons, call 718-390-7245. Opening dates for the 2017-2018 season have not yet been confirmed.

Unless otherwise noted, all photos courtesy of the venues.